On the acting front, I've just been cast in a brand new play by GARRY KLUGER called IN THE YELLOW WOOD. It is in development at THEATRE WEST and I am delighted to be a part of such a poignant yet funny project. I have a supporting role and will be performing once again with the fantastic ADAM CONGER and ASHLEY TAYLOR. The three of us appeared this past Spring in CHARLIE MOUNT's THE LEATHER APRON CLUB, a brilliant political thriller that received rave reviews. IN THE YELLOW WOOD will go through the development process with the goal of having it chosen as a mainstage production in 2017 or 2018.
*****************************
I finished a short play entitled, ONE NIGHT AT SEA and presented a staged reading of it, alongside the wonderful GEORGE TOVAR, for the Writers Workshop at Theatre West. It has also been submitted to two one-act play festivals on the east coast and I will know this coming Spring whether it has been accepted.
******************************
I'm still working on my one-woman show, SECRETS THAT YOU KEEP and I'm about halfway through Act 2. My goal is to finish it by the end of January and start working it up on Monday nights in TW's Actors Workshop.
******************************

I'm sure I won't be the only one to say Good Riddance to 2016. Although artistically, it was a very gratifying year for me, the activist in me had a rough time, particularly after November 8th. Those who know me won't be surprised to learn that I will be attending the WOMENS MARCH in Washington, DC on January 21st. I have many loved ones whose equality is being threatened and I will not sit quietly and do nothing. So, in addition to my letter writing, protesting, and petition signing, I have made a commitment to stand by anyone who is targeted by hate and offer them support. Having that message heard on the 21st is my mission.

SEPTEMBER 27, 2016
Shot a lovely short film yesterday written and directed by SHARON MOR called FOREVER YOUNG. I had the pleasure of playing AMANDA - she is the mother of two daughters, and her husband is suffering from Alzheimers Disease. It was a very nice supporting role and I'm very anxious to see the finished film! I think this is going to be a good one!

The encore run of THE LEATHER APRON CLUB was a big success!

We earned three more rave reviews, including one where I was described as "the ruthless Karen Ragan-George," when referring to my portrayal of Presidential Candidate Senator Emily Green! I'd say that was accurate!

We were all sad to have it end, but the cast holds out hope that we'll get the opportunity to present it again somewhere, somehow.

I had the privilege of participating in a Staged Reading of SHE IS HISTORY by the extremely talented writer/actress AMY JAN SIMON. Amy assembled a cast of some of the most incredibly talented working actresses in the biz today. Every line they delivered was knocked out of the park.

What a pleasure to sit alongside CATHY LADMAN, MELANIE CHARTOFF, MO GAFFNEY, CLARA RODRIGUEZ, JANE BRUCKER, Saturday Night Live legend LARAINE NEWMAN and fellow THEATRE WEST members ASHLEY TAYLOR and RILEY RAY BAKER. I primarily read Stage Directions, but got to have some fun reading the part of Henry Stanton (husband of famed feminist ELIZABETH CADY STANTON) as well as a couple of one-line characters. It was directed by the extraordinary LEE COSTELLO, who with only one rehearsal, managed to pull it all together beautifully. It was truly inspiring to see all of these women bring their A-Game! 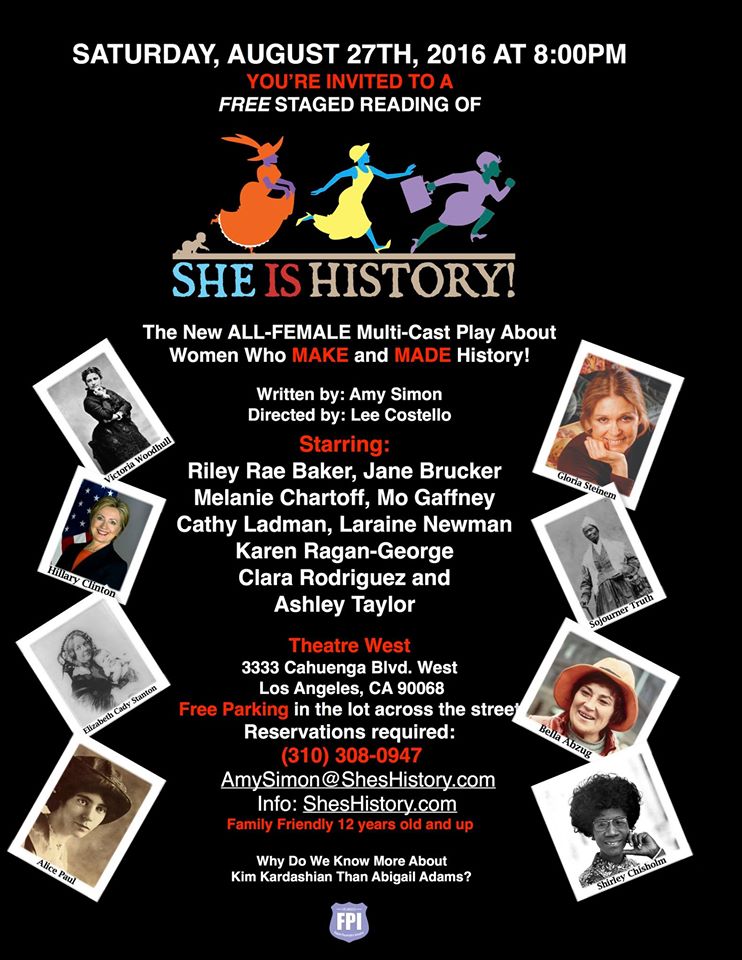 Developing, via the Workshops at Theatre West, my one-act play, ONE NIGHT AT SEA and my one-woman show, SECRETS THAT YOU KEEP.

RE-OPENING TONIGHT for a 3 Week Encore Run - The return of THE LEATHER APRON CLUB!
Tickets: http://theatrewest.org/onstage/the-leather-apron-club/

BACK BY POPULAR DEMAND!

Due to the overwhelming response - critically and in ticket sales - THEATRE WEST will be presenting three weekends of Encore Performances beginning July 15th. The play will run through the last weekend of July with performances Fridays & Saturdays at 8p, Sundays at 2p, and two additional Matinees on Saturday, July 23rd & July 30th at 2p.

Please come see if it you haven't yet - or see it again if you have!!

This Spring has been invigorating! Being in THE LEATHER APRON CLUB has been one of the best and most exciting experiences of my life. I will forever be grateful to the inimitable CHARLIE MOUNT for writing such an amazing script, choosing me to play SENATOR EMILY GREEN, and guiding me and this brilliant cast into the fascinating world of the "American Illuminati."
We have gotten RAVE reviews, cheers, and Standing Ovations. It's almost surreal and I'm blown away by it all.
Oscar-winner RICHARD DREYFUSS led a Standing Ovation last Saturday night. LEE MERIWETHER hugged me, said lovely things about my work, and thinks the play deserves to be on Broadway! DAN LAURIA and LOUIS HERTHUM, two powerhouse actors that I greatly admire saw the play and loved it. Writer/director/acting coach/teacher KIMBERLY JENTZEN enthused over the cast, and especially our lead ADAM CONGER, who has most of the heavy lifting and does it so effortlessly.
The play closes this coming weekend, but we are all hoping that somehow it will be done again.... I'll keep you posted!!
THANK YOU to everyone who has come out to see this very special play!!

So far, THE LEATHER APRON CLUB has gotten four stellar reviews! One even gave us 5 STARS! It is so exciting and gratifying to be part of such an amazing play!
Here's the link to the latest review: http://nohoartsdistrict.com/theatres/theatre-reviews/item/3459-the-leather-apron-club

THE LEATHER APRON CLUB opens tonight, Friday, April 22, 2016.  We had two nights of Previews, one of which resulted in a Standing Ovation! THAT was exciting!
This exraordinary play was written and directed by the amazing CHARLIE MOUNT, with an assist from the lovely and talented CHLOE ROSENTHAL. It stars ADAM CONGER, ASHLEY TAYLOR, ALAN SCHACK, YANCEY DUNHAM, ROGER KENT CRUZ, DON MOSS, TONY BATTELLE and myself. We're all very excited to be a part of this wonderful, provocative, and entertaining night of theater.
If you're in Los Angeles, come see it!

The time is almost here!

MY WEEK IN SHOW BIZ

It's many things, but life is never dull.... I emailed some of you about my commercial shoot, but here's the rest of what happened this week.

Sunday, I was house managing the matinee at Theatre west and as I was about to open the house to the audience, an electrical fire broke out in the light booth. I had walked into the house to check with the Stage Manager to see if I could bring in the audience and immediately saw smoke in the booth. Ernie, the Stage Manager was inside the booth reaching for something (it turned out to be a fire extinguisher). I immediately rushed out to get the lobby fire extinguisher. In the short time it took me to rush back in, smoke had filled the booth, but Ernie had the booth fire extinguisher and was working on putting it out. I handed off the lobby extinguisher to the producer and told him I'm evacuating the building. Everyone got out of the lobby quickly, as I told them to, and I ran upstairs to evacuate anyone up there. It was fortunate that our heroic stage manager happened to be in the booth when it happened and eventually put it out, but not before the lobby was overtaken by smoke. I inhaled quite a bit of acrid smoke and had some bad reactions to it that lasted for a couple of days (as did Ernie).

On Weds., I had a pre-shoot meeting for the Best Buy commercial & some of the crew were sick. Since my resistance was way down because of the smoke and my asthma, by Thursday, shoot day, I was sick & had laryngitis. I took everything under the sun and was able to speak (albeit in my best Brenda Vaccaro), and thankfully the shoot was MOS. By Thursday night, my voice was gone. Yesterday, I cancelled my rehearsal and stayed in bed until I had to leave for the theater. I'm house managing all weekend. I prepped the theatre, assigned tasks to the Ushers, and left before the audience arrived. I'm somewhat better today, but am staying in bed until I go to the theater tonight. Unfortunately, there is no one available to house manage so like last night, I'll go set everything up (wearing surgical gloves, of course!) etc., and go home. Bah!

On a lighter note, the director, producer, crew, ad agency and Best Buy reps loved (their word) my work. They laughed at almost everything I did. I was very happy about that. :-)

Ah, the life of an actor!